State of the Disunion 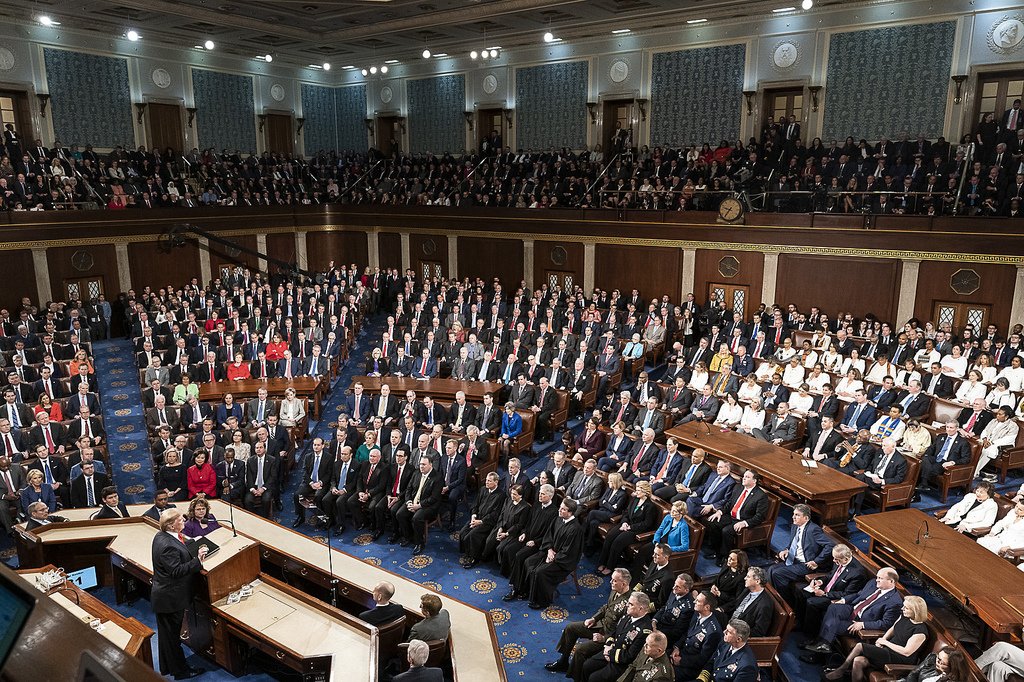 The State of the Union Address was full of fancy words, but void of any real meaning or plans of meaningful action. Trump’s attempt to appeal to the American public only managed to remind us of the things we deserve in a President, the things he consistently fails to provide.

Many of Trump’s most quoted points in his address regard compromise, and getting politicians to work together more and see across the aisle.  In fact, for the first moments of the speech, he seems to focus on the nation as a whole.

“The agenda I will lay out this evening is not a Republican agenda or a Democrat agenda. It is the agenda of the American people.” President Donald Trump said.

All of that sounds nice, but it’s hard to believe he actually means it. After all, less than a month ago this same man was forcing a prolonged government shutdown because he couldn’t get exactly what he wanted. Are we supposed to believe that everything has changed, and that the President has completely flipped his attitude that quickly? It seems far more likely that he’s just blowing hot air, saying exactly what he knows will make his limited definition of the American people clap without ever really intending on following through.

This becomes even clearer when Trump dares to address actual policy decisions. His claims of lowering healthcare costs have some merit, but it’s hard to see any success in that field when he and his party work constantly to dismantle an act intended to do exactly that.

Other things he brings up, he addressed on only the most superficial of levels, mentioning only that he plans to improve them, without ever mentioning what crazy ideas he thinks will be beneficial. At one point, he said that his administration plans to destroy both AIDs and childhood cancer— both worthy goals that prompt emotional response, but not anything the President can claim to take credit for. Especially when his most recent budget plan piles more work on the Institute of Health without increasing their funding by a single penny.

A couple of times in the speech, it seems as though Trump is on the verge of a plan to fix an important issue. He brings up women and their inequality in the workplace, and for half a moment the nation beams with pride that even a deeply misguided man has started to see the unsettling reality of sexism in America. He even hints at a plan to help women suffering in developing countries.

“As part of our commitment to improving opportunity for women everywhere, this Thursday we are launching the first ever Government-wide initiative focused on economic empowerment for women in developing countries,” Trump said.

Then, just as quickly, he twists his topic, turning instead to his sanctions against China and other economic decisions. Trump treated women with his usual brisk manner, only further emphasizing his lack of respect for the struggles that women go through and the discrimination women face in this country. Tossing in half a sentence with no action behind it is as condescending to the country as Trump regularly is to women.

At the heart of Trump’s speech was a message of “choosing greatness”, an idea he twisted again and again until it meant agreeing with him and blindly following his wishes— whether that meant building an ill-advised border wall or robbing a woman of rights over her own body. Just as he twisted the seemingly innocuous phrase “Make America Great Again” into a call to return America to its discriminatory past, Trump’s speech twisted the idea of greatness once more to mean following any number of his misguided ideas.

The true greatness in our country lies not in following this man’s vision, but in advocating for the rights of all and a world in which everyone can be successful and happy. Choosing greatness does sometimes mean choosing compromise, but it does not mean bending blindly to the will of the president or anyone else. Find a cause you care about and work to improve the world in your own way, even if it means going up against authority. That is how we truly choose greatness.

Hate of the union

President Donald Trump delivered his second State of the Union Address, organizing his accomplishments and plans for a sensational speech. Trump’s rhetoric, without a doubt, led to his nearly perfect approval rating, 97 percent of the Republican party. Not surprisingly, 82 percent of people registered as Independent also approved of the address. However, the speech only received a 30 percent approval rate from Democrats. With very few flaws, this number should have been greater, but because of the man delivering it, the speech was wrongfully criticized.

Trump had a spectacular gallery, a prime example for several of his discussion points. Topics included budgeting money for childhood cancer research and medical transparency, topics that both parties support. Even with conservative plans, Trump kept everything clear and concise. At this point in his presidency, Trump undergoes constant scrutiny, from both sides. If anyone else but Trump delivered this speech, it would have enjoyed an overwhelming amount of praise. In its entirety, it was a solid, informative, and entertaining address to the States. If Obama gave that exact speech four years ago, he would have been greatly applauded for his performance and his future plans.

The people of the country need to realize the trustworthiness of our president. In the opening of the State of the Union Address, Trump established many of his accomplishments. The most emphasized, and the most impressive for that matter, was the increased number of jobs. Since being elected, Trump’s economy has created  5.3 million jobs. A notable 5 million Americans have been lifted off of food stamps. With “the hottest economy in the world”, one would think that the president has done a pretty good job in his first couple of years leading the country.

Trump promised more jobs, border safety, demanding money from countries, and these guarantees have been kept. So when the president says he is going to do even more for the country, by “bringing issues to reality”, there is no reason not to believe him. People like to use their assumptions and the false information that they receive to hate against Trump. Of course he is not perfect, no person is, but Trump should be judged and evaluated based on his job as a president. People need to look past the misinformation, and solely assess Trump on what he has and has not done.

No matter what would have been said, Trump’s opponents would have found to cause for an uproar. Regardless of his accomplishments or promises to better the United States, his critics want to think the worst. Every one of his actions are criticized and held to an impossible standard. For all of the scrutiny and evaluations that the president undergoes, it is remarkable that he even is able to run the country, let alone achieve everything that he has. No president in the modern era has received the amount of hate, from both parties, that Trump faces everyday.

Instead of holding the leader of our country to an unattainable ideals, let’s keep an open and positive mind for the rest of his presidency. For million of Americans, Trump has created a better and safer country. It is quite possible that the president could accomplish all that he promised in the State of the Union if he had more support and less hate.

Thank you for your donation!

There was an issue submitting your request.
0